Sound therapy is a holistic method for balancing the body, mind, and soul – as well as improving the speaking and singing voice. In contrast to music therapy, sound therapy uses individual components such as tones without rhythms.The imbalanced tones in a person’s voice can be determined through voice analysis, which ca 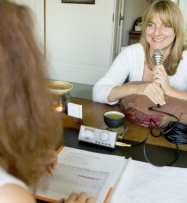 n be done with a chromatic tuner to graph the notes of the speaking voice. This identifies the weak and/or excessive notes (frequencies) in the voice. According to sound research, the voice accurately reflects the brainwave patterns, which reflect all activity of the physical body. Research has shown that a frequency missing in the brainwave will also be missing in the speaking voice. It is also possible to learn intuitive methods of voice analysis, which will be discussed in the Vibratuning book.

Once the weak and/or excessive notes have been identified, sound exercises such as releasing excessive notes (sounding) and toning the weak notes can be used to balance the voice. Even just listening to the weak tones strengthens them in the voice, but actively singing them brings quicker results.

Christine’s Tune Your Voice – Tune Your Life CD can be used for both of these purposes. Tuning forks and singing bowls can also be used to balance the frequencies. Please see Articles for Toning & Tuning Your Voice and Tuning Forks.

“Sound is a major contributing factor to our present states of health and consciousness. The difference between the random sounds of daily life and the focused use of sacred sound is that the latter produces harmony rather than dissonance. When we learn to produce and direct specific healing sounds through our energy centers (chakras) into the physical body, balance occurs. Our entire energy system is strengthened. We have greater health on all levels, and we can disrupt negative qualities and patterns as they arise within our physical and subtle bodies. It all begins with understanding eight basic principles of healing sound: Resonance, rhythm, melody, harmony, pitch, timbre, accumulative and detectable effects, and sound as energy.” (from The Healer’s Manual by Ted Andrews).

“Research has shown that when we are deprived of certain light frequencies we can become sick. One of the most fascinating scientific facts to emerge recently is that sound behaves in a similar fashion to light. In other words, sound and light act like vitamins and minerals in our body. Most people are deficient in certain tones and this is traced when the human voice is recorded and monitored. We need a certain balance of sound frequencies, which may vary from one individual to another, in order to maintain our bodies in a healthy state.Recent experiments indicate that one of the most powerful ways to heal the individual is to play back the missing frequencies at a low octave which corresponds to brain wave frequencies. What happens here is quite remarkable and really beautiful. The body is simply helped to heal itself by activating the control center in the brain that looks after this healing.” (Jocelyn Godwin, ed., Cosmic Music, Inner Traditions, Rochester, Vermont 1989)